By Heather Ender - March 13, 2019
Behind the Lens: An Interview with Mike Anderson & Dan Knudson

I sat down with Mike Anderson & Dan Knudson at Dan Knudson Productions (DKP), our production arm at One Floor Up to talk shop about what they do and why they love it.

Most of our work is corporate, whether it’s interview-based or motion graphic-based. What do you love about the corporate work we do?

DAN: Our bread and butter is corporate interview videos, oftentimes with industry leaders. If you listen, you can get in-depth knowledge that a lot of average joes don’t get to hear. And to me, that’s the payoff. We know a little bit about a lot of industries. That’s what’s most interesting and rewarding.

What types of productions excite you?

MIKE: I love projects where I get to do motion controlled time-lapses. They’re exciting, because you never know what you’re gonna get. You hit ‘go’ and you have to be patient and let your experience in programming the rig take over and let nature do what it does. And hope a cloud doesn’t form right over you as soon as you start recording. You can spend hours and get 10 seconds of amazing footage, but it’s worth it. My success rate is probably 25%.

DAN: Getting what you expect is probably 60%, but getting something that’s really, really cool, that’s about 25%.

What types of lenses do you shoot with?

DAN: We use XEEN prime lenses for the majority of our productions. We shoot them wide open at about T2.0 and it creates a really nice shallow depth of field. And that’s when you get the bokeh patterns in the background. It’s the soft, gooey look that we like.

MIKE: I like using 14s, 20s and 24s on our time-lapses. These are wide and ultra wide lenses. The reason we use wide is that you need to have foreground to pull off of to make a good looking time-lapse and wide angles allow you to see both foreground and background. Foreground adds interest and wide angle lenses bring foreground into play easier. We use these because we need them to be fast. Especially when it comes to lunar time-lapses. How much light can they let in?

DAN: The wide lenses on a time-lapse help you establish depth and it’s a bit of a perspective shift, which looks extra nice.

Mike and Dan shoot a variety of productions and I talked to them about two in particular that I thought were vastly different. The first I asked them about was shooting for The Ranch, a show on Netflix. And the second was a project for One Floor Up we called Bounce, Bounce.

You guys shoot content for the Netflix show, The Ranch. What’s the typical ask for this project?
MIKE: We shoot the scene transitions and commercial bumps for The Ranch. At every single location you see in the show, we have to establish it through footage, so the producer will call and ask for specific requests based on the episodes. We need a shot outside Maggie’s, we need a shot of Rooster’s cabin, etc. Then we also capture the more stock-looking content. Cowboys working, cattle branding, cattle grazing, cars going down dirt roads.

DAN: We go to Norwoord, Nucla, and Natarita to shoot all this footage.

MIKE: We shoot all our footage on two rigs: We do motion on the RED Scarlet on a Dana Dolley and then timelapses on the Moco rig with Dynamic Perception. Big shout out to Dynamic Perception, who are the pioneers of motion control time-lapse. The rig we use for The Ranch footage is the exact same rig that they use for the intro to House of Cards.

DAN: You’re out in the country. It’s beautiful. We’re only focused on the footage, there is no audio or interviews or anything else.

MIKE: It’s great. We get to experiment and be outside. And our biggest concern is not stepping in cow shit. 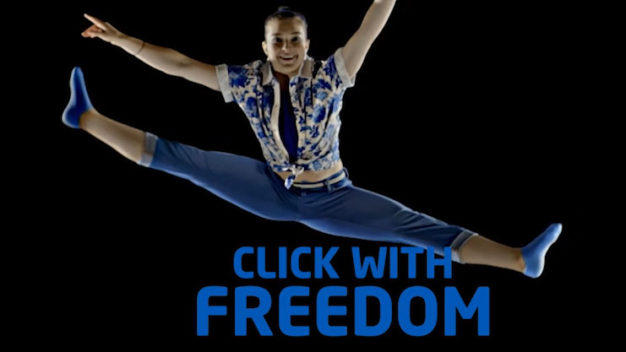 On the other, you’ve done more studio work in a controlled space. Let’s take Bounce Bounce for example, the social content we worked on for Webroot. What was the technical ask for this project?
MIKE: We were assigned to shoot high speed drama. Filming parkour athletes in super slo-mo as they jumped on trampolines.

DAN: For the drama aspect, we used double spots for rear split lighting to cast light from the side and behind. And that’s what gave us the drama and shape to the subject.

MIKE: We had to source a camera that could shoot high frame rate, 240fps. The technical solution for that was to get an unlocked FS5 and Odyssey7Q+ by Convergent Design right here in Colorado.

Overall, quite the range of productions! From corporate interviews to scenics to high frame rate action.
DAN: Yes it is. We have a lot of fun and I think to us the challenges that come with every production is what makes it fun.