As someone who was raised by a professional Boy Scout, (literally, my dad was a Boy Scout District Executive) “Be Prepared” was more than a saying in our house, it was a rule. Because of that I think, prepping for a shoot day is one of the most important parts of the shoot. That formative training also means that my purse weighs about 15 pounds these days! 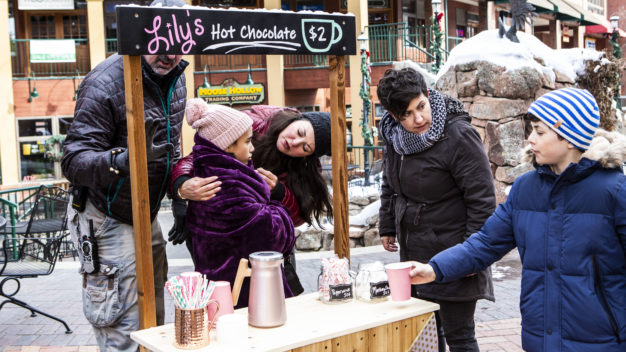 As with most events, the prep is vital because once you are on set, you can’t always just run to the store to get something you forgot. I have to think ahead and try to anticipate any needs based on the type of shoot. Is it going to be an outdoor shoot? Will we be super mobile and need to carry snacks and props in backpacks? Will we need heaters, chairs or tables? How many? Exhausted yet? I get it, but I actually thrive in this environment. I love the live, impromptu nature of shoots. I love building an environment where everyone feels taken care of, even if it’s in a 10 x 10 canvas tent in Winter Park in January. I also love the process of concepting and styling shoots and then seeing it all executed on set.

Props, wardrobe and craft services (feeding the talent and crew for entirety of the shoot) are my main areas of responsibility on set but, of course, everyone involved in the shoot must prepare their camera gear kits and necessary paperwork for the day on their own as well. As I’ve mentioned, organization is so important when planning a shoot day. For me, lists work great. I usually have one scrawled in my notebook and a “clean” list in my phone. At first the list is large and sometimes ambiguous as we find the location and cast talent. As we get closer to the actual shoot day, my list becomes more like buckets- “Props”, “Wardrobe”, “Craft Services” and “Misc”. Whether it be one or more of those buckets, I’m now figuring out missing pieces and places I need to fill in gaps.

The next most important part of the preparation is packing. In my time in this position I have gotten much more efficient at packing, unpacking and then repacking as I learn the ropes from shoot to shoot. I try to pack like with like when possible. For instance, I have a section in one of my craft bins that is just our disposable plates, cups and cutlery. This makes it much easier to take stock before I go shopping. I also usually have a running list from the last shoot of things we ran out of or things I noticed we need for the future (phone chargers, Sharpie pens and green tape to name a few items). Once on set, craft services will typically go somewhere other than where props and wardrobe go so I create separate bins for them. Because props and wardrobe are often out of my hands once we start filming, I need to keep close tabs as the shoot proceeds to make sure I loose or don’t forget anything I packed. This is, again, where those lists come in. For the most part everything I pack is on a list. As I repack at the end of the day, I can use this list to check things back into their “home” in its respective bin by the end of the shoot. When shoots are multiple days, you guessed it, there are multiple lists.

Although it all sounds a bit complicated, my hope is to keep refining a system that makes each shoot at One Floor Up a little easier, a little more thought out, a little more successful than the last. No matter how much I plan I will still be surprised or unprepared for something…and I kind of love that. It’s humbling, inspiring and gives me a goal to make the next shoot even better.